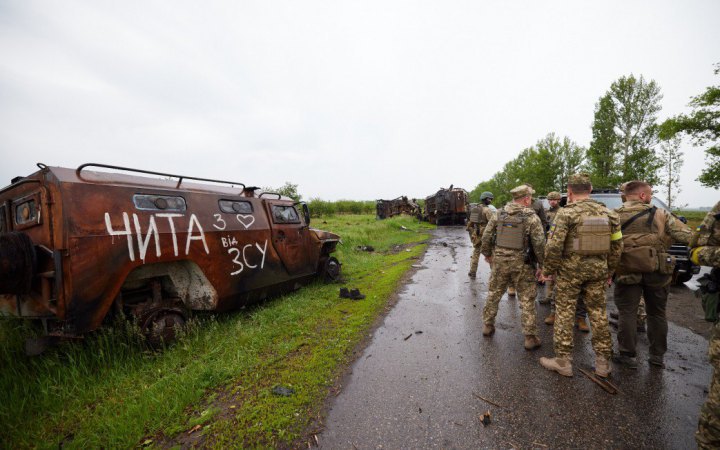 Photo: Office of the president of Ukraine

President Volodymyr Zelenskyy during his work trip to the Kharkiv region visited the frontline, got acquainted with the operational situation, and presented the servicemen with state awards and presents.

President also held a meeting regarding rebuilding the region from the consequences of the war: the russian army's actions resulted in the destruction of 2229 apartment buildings in the Kharkiv region, 225 of them are totally destroyed.

In his evening address, Zelenskyy said that russia had already lost not only its battles for Kharkiv, Kyiv, and the northern part of Ukraine but also its prospects. President dedicated his address to four cities: Kharkiv, Kyiv, Sievierodonetsk, and Kryvyy Rih. Why these exact cities and why now – read in our news story.

The European Union governments failed to agree on the russian oil embargo. The negotiations will continue tomorrow in the morning as the parties are planning to prepare the agreement before the EU summit in the afternoon of Monday.

Meanwhile, the shellings did not stop: in the morning russian occupiers yet again shelled the border area of the Sumy regions.

The shelling of the Mykolaiv's residential area didn't go without casualties.

Kramatorsk was left without electricity because of the shellings, the repairmen are already working on restoring the power lines.

In Kharkiv, there was an explosion at around 4 p.m., and the witnesses reported the shelling of the northern districts of the city.

Russians shelled three communities of the Kryvyy Rih district in the Dnipropetrovsk region.

According to the Luhansk Regional Military Administration head Serhiy Haidai, the occupiers can't advance deeper into Sievierodonetsk, they were driven out of Toshkivka. Also russian were pushed back for several kilometers in the direction of Komyshuvaha – Popasna.

The General Staff reported that the enemy is trying to gain a foothold at the northeastern outskirts of Sievierodonetsk, they are replenishing stocks of ammunition and combustive-lubricating materials for new attempts to force the Siverskyy Donets river.

The Ukrainian army hit two russian air targets in the sky over the Sumy region, and our fighters destroyed 39 occupiers and a warehouse with ammunition.

The Kherson regional council member Serhiy Khlan said that the occupiers demanded that the Kherson region residents who were illegally detained and tortured sign the statements condemning the "Ukrainian regime", "greeting the russian federation's forces", and ones regarding issuing russian passports.

There are queues again before the russian checkpoint near the city of Vasylivka (the Zaporizhzhia region): around 400 cars are trying to get to the territory controlled by Ukraine.

The residents of temporarily occupied Mariupol, Kherson, Berdyans, and Tokmak are trying to make it to Zaporizhzhia. People are standing in line for several days. There are mostly children, elderly, disabled people, and women, some of them pregnant, in those cars. After 8 p.m. people try to stay in the cars as active shellings start.

The Center for Countering Disinformation called on journalists and bloggers not to spread information from the frontline "from personal sources", as the enemy propaganda generated dozens of fakes about our defenders allegedly capitulating daily.

Kyiv's mayor Vitaliy Klychko congratulated the capital's residents and guests on the Day of the city which is celebrated on the last Sunday of May.

Our Lithuanian friends raised 5 mn euros in three days to buy a Bayraktar for Ukraine, the purchase will be made through the Ministry of Defence of Lithuania.

Kalush Orchestra and Serhiy Prytula sold the Eurovision-2022 glass microphone at the charity auction for 900 thousand dollars. Who is the new owner? Read our news story for an answer.

The most complete picture of today is on our website.