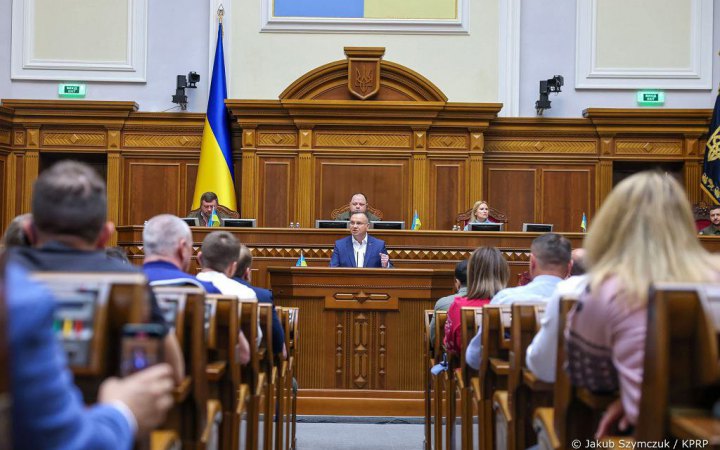 There was a lot in the speech about the present and the future, but also about the past.

“Enemies have repeatedly tried to quarrel with us, directed us against each other. Today they continue to try, to frighten the Poles with Ukrainians and Ukrainians with Poles, use painful topics from our painful past, from our history. But they will not succeed, we have learned their methods too well, we know that the tension of Polish-Ukrainian relations serves exclusively foreign interests, and it hinders us, Poles and Ukrainians.”

President Duda’s speech adds to the belief that Ukrainians and Poles have learned from the lessons of the past. Of course, we need to be mindful of conflicts so that they never happen again. But not forget the pages of our common victories.

Like the march of the Polish and Ukrainian Armies into Kyiv in the spring of 1920, which ended with a joint parade on the Khreschatyk on May 9. Then a few months later, there was a joint heroic defense of Warsaw against the Red Army. Together, we saved Europe from the Bolshevik offensive.

But Poland made peace with Russia, which put an end to the union between our peoples at this stage in history. However, this peace did not save the Poles from Russian aggression, only postponed it for 18 years. Then the USSR, together with Germany, attacked Poland and began the Second World War.

The war resulted in a new confrontation between Ukrainians and Poles. A bloody conflict that claimed thousands of lives on both sides. And weakened both nations, making it easy prey for the USSR.

This was witnessed by the Ukrainian and Polish insurgents, who didn’t lay down their arms after the defeat of Germany, and continued to fight against the Soviet occupier.

A few years before this, they shot at each other, and decided to not end an unnecessary conflict, but to fight together against a common enemy.

“Poles and Ukrainians can and should play a special role in this struggle for freedom and independence. Not only because we live side by side and are blood relatives, but because we mutually allowed the bloodshed of our peoples, which benefited others only.”

These are the words of Marian Golembiowski, the leader of the Polish underground in Zamosc. He was a participant in the attacks of the Home Army against the Ukrainians in the Chelm region, but later initiated negotiations with the UPA.

After the expulsion of the Nazis, Ukraine was silenced by NKVD troops.

Executions, imprisonments, and mass deportations are common tools of “Sovietization”, familiar to Ukrainians since the 1920s. A similar thing happened in Poland, where a communist government supported by Moscow came to power.

The presence of a common enemy forced the Ukrainian and Polish undergrounds to forget their past enmity, and in the spring of 1945 negotiations were successful – a truce was reached, mutual killings stopped. But the underground did not stop there, the idea of a joint struggle arose. It’s one thing to talk about cooperation, it’s another to go into battle and entrust your life to the person who shot at you yesterday.

On 6 April 1946, the underground attacked the Werbkowice station together for the first time.

Soon the idea arose of a large-scale offensive operation against the town of Hrubieszow. The tasks were practical – to intimidate the communist punitive authorities, to release those who were arrested, to seize documents. But they also had a political goal – to manifest a joint struggle of Ukrainians and Poles.

On the morning before the offensive, insurgents began to gather near Hrubieszow. On the Ukrainian side there were soldiers of the “David”, “Yar” and “Chavsa” units along with the Security Services soldiers, from the Polish side – “Mlot”, “Sliepo”, “Viktor” and “Gel” units.

“Between our riflemen and the Poles a conversation began, they got to know each other, told stories about past meetings – when they were still enemies” read a report about their meeting.

The night battle in the city lasted for an hour and a half, during which time the NKVD, Polish security forces and post office buildings were destroyed, the police headquarters were seized, cars and documents destroyed and 25 prisoners released. According to insurgent reports, the NKVD and Polish communist forces lost about 100 soldiers killed, while the communists officially reported the deaths of 18 people.

The political losses of the communists were much greater – information about the successful Ukrainian-Polish operation deprived the authorities of the opportunity to speculate on the confrontation between the two peoples.

This victory did not stop the mass repression of the communist regime, which first liquidated the Polish and later the Ukrainian underground. But today, we need to remember it in order to realize the value of conflicts between our peoples and the value of cooperation between us.

It is symbolic that Duda’s speech in parliament took place on Symon Petliura’s date of birth. One of the initiators of the Polish-Ukrainian union in 1920.

I hope that the current cooperation, based on an understanding of a difficult history, will be stronger than in the previous century, and we will finally put an end to the existence of the Russian Empire together. In memory of our ancestors, who two centuries ago rose up against it in revolt under the still relevant slogan of “For our and your freedom.”