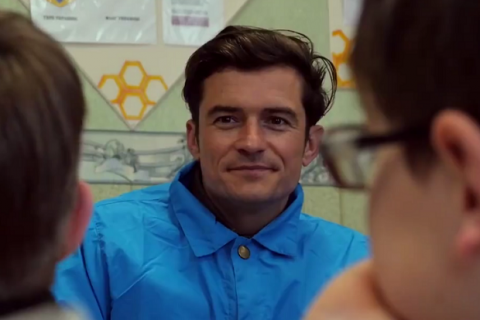 Bloom visited classrooms hit by shells just three kilometres from the frontline of the conflict that broke out more than two years ago.

The trip came as new findings show that nearly a quarter of the world’s school-aged children – 462 million – now live in countries affected by crisis.

“I met children like 11 year old Liana who hid in the basement of their school for almost two weeks, in freezing conditions, without lighting or heat, while shelling devastated the classrooms above,” said Orlando Bloom, who first travelled to see UNICEF’s work in 2007.

“Now, after surviving some of the most terrifying experiences life could possibly throw at them, all they want is to get back to the safety and routine of school and plan for their futures.”

“Education is providing children in eastern Ukraine with the building blocks to rebuild their lives in a safe and supportive environment,” said Bloom. “Every child in humanitarian emergencies deserves a fair chance of a bright future.”