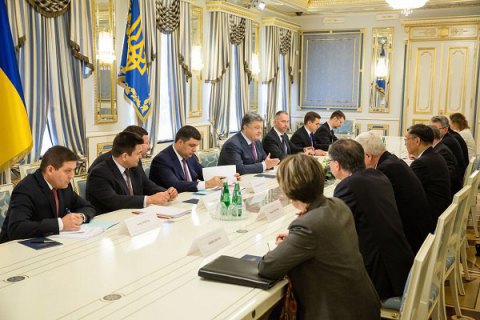 President Petro Poroshenko at a meeting with G7 ambassadors has emphasized the need to extend the sanctions against Russia because of its failure to honour its commitments under the Minsk agreements, the official presidential website has said.

Poroshenko noted that in the recent days the situation in Donbass had escalated due to the actions of pro-Russian militants. The diplomats were debriefed on the violations on the part of Russia, the presence of Russian troops in occupied Donbas and the facts of supplies of troops and weapons to the occupied territories from Russia.

"The sanctions are an effective tool and the motivating factor that will make Russia to fulfil the Minsk agreements," said the president.

He also underlined the importance of deploying an armed OSCE police mission in Donbas, which he said is critically required for a political settlement of the situation, and urged the G7 to support this initiative of Ukraine.

"Only after ensuring security, progress in the introduction of an armed OSCE police mission, a sustainable ceasefire, withdrawal of artillery and heavy machinery, withdrawal of the occupant troops by Russia, and release of hostages, can we start talking about political mechanisms," the president stressed.

He told the ambassadors that their governments should increase pressure on Russia to release Ukrainian pilot Nadiya Savchenko, who was sentenced to 22 years in prison on false charges, as well as all illegally detained Ukrainian citiizens.