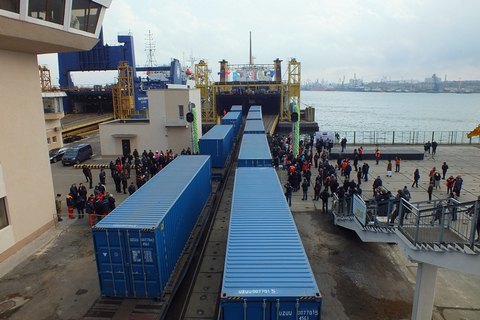 Ukraine has joined the Transcaspian international transport route and agreed to reduce tariffs on the transport of containers along the so-called New Silk Road, Infrastructure Minister Volodymyr Omelyan has said on Facebook.

He added that the director for freight transport and logistics at the Ukrainian Railway (Ukrzaliznytsia), Ivan Fedorko, signed the protocol on the matter in Tbilisi on 17 May.

"An agreement has been made to reduce the transport fee from 5,559 dollars to 3,980 dollars per 40-foot container from Izov to the border with China (Dostyk). We are working on making the Silk Road cheaper!" he said.

On 15 January 2016, the ministry jointly with Ukrzaliznytsya launched a trial run of a container train along the new Silk Road. The train consisting of 10 cars and 20 forty-foot containers departed on 15 January from Chornomorsk. This route is a new direction of the Silk Road and an alternative, which will redirect traffic flows in an eastern direction, bypassing the territory of Russia. It includes ferry crossings of the Black and Caspian Seas (Chornomorsk (formerly Illichivsk) - Batumi and Alat - Aktau port) and is intended to become competitive in comparison with the traditional overland route.