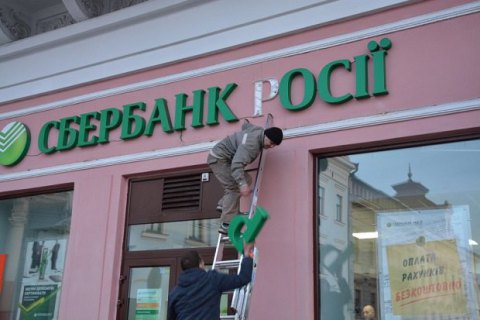 Russian state-owned banks are looking to sell their subsidiaries in Ukraine.

According to the Russian newspaper Kommersant, Sberbank, VTB and Vnesheconombank may leave the Ukrainian market. Kommersant's sources say that Sberbank was negotiating the sale of his "daughter", but to no avail so far. Nevertheless, the bank continues to look for a buyer.

VTB told the newspaper that it bears serious losses in Ukraine, including due to defaults on loans. The press service of the bank also noted that "the presence of Russian banks in Ukraine is extremely politicized", recalling the acts of vandalism in the VTB offices. Earlier, the head of the bank, Andrey Kostin, announced during the Investor Day in London a possible sale of its subsidiaries in Ukraine. "We do not see great opportunities there, either economic or political. I think if have a chance, we'd even sell the business," he said.

According to Kommersant, Russia's Vnesheconombank is also looking for a buyer for its Ukrainian subsidiary Prominvestbank.

Kommersant recalled that earlier the state banks showed no plans to sell their subsidiaries. Moreover, the National Bank of Ukraine statistics show that Russia's Sberbank had some profit in Ukraine while VTB and VEB cut losses last year.