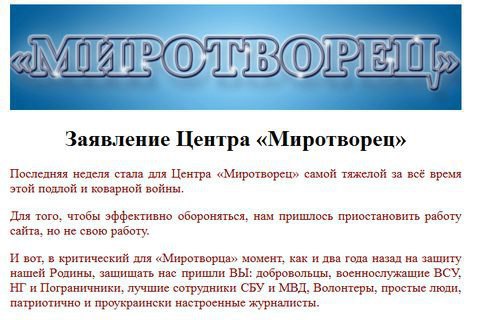 The Myrotvorets (Peacekeeper) website, which used to collect personal data about pro-Russian separatists and Russian troops taking part in hostilities in Ukraine's Donbas, has resumed operation.

"With such level of public support, the Peacekeeper will certainly restore functionality in the nearest future," reads the statement on the website's front page.

The Peacekeeper, associated with MP Anton Herashchenko, was established to track down the identities of Donbas separatists or their accessories. Last week, the site sparked a scandal after it published the contacts of about 5,000 journalists who had "accreditation" from the self-proclaimed separatist Donetsk and Luhansk people's republics.

Journalists complained that it was illegal to disclose their personal data. The Kyiv Prosecutor's Office opened an investigation into "the fact of obstructing the work of journalists."

The EU demanded the removal of the list of accredited journalists while Ukrainian ombudsperson Valeriya Lutkivska suggested the website should be closed.

Amid the growing pressure, the website decided to take the Peacekeeper down.