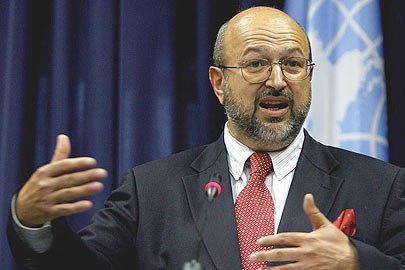 The Organization for Security and Cooperation in Europe is considering sending an armed police mission to help conduct elections in conflict-torn eastern Ukraine, if there is agreement on all sides, including Russia.

""It would be a police operation to help maintain law and order in this area and ... to help provide a safe environment for the elections to take place," OSCE Secretary General Lamberto Zannier told the Associated Press in an interview on May 19. He said his group was ready to send hundreds of policemen, potentially armed, to ensure the vote takes place in a secure and safe atmosphere.

He pointed out, that the mission, which has been requested by Ukrainian President Petro Poroshenko, could work alongside the local police force in the Donetsk and Lugansk regions to prevent criminal activity and help international observers monitor the vote. Zannier stressed, however, that the mission would only be able to deploy after both sides fully commit to a ceasefire.

"It is a complicated scenario, but it's certainly something that we can do if, as I say, everybody agrees," Zannier said.

Russia has spoken against such a mission, with Foreign Minister Sergey Lavrov calling the issue "an artificial problem" and saying unarmed monitors of OSCE would be enough for the vote.