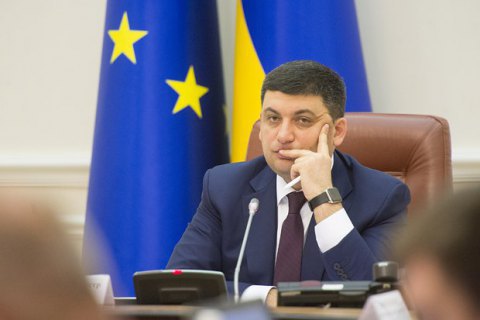 Prime Minister Volodymyr Groysman on 19 May outlined a plan of priority steps for his cabinet for 2016.

According to the head of government, the main tasks for the current year are macroeconomic stability, improving the quality of public administration and public services, the establishment of the rule of law and fight against corruption, ensuring the safety of citizens and the creation of favourable environment for business.

"The main priority that we set for ourselves is to ensure a high standard of living, but it can be done, no matter what anyone says, only through absolutely steady economic stability and long-term economic growth. We can build a high-quality, successful country only when we have a stable, well-developed and open economy," the prime minister was quoted as saying by the government press service.

One of the top priorities, according to Groysman, is the achievement of macroeconomic stability. The prime minister noted that Ukraine had dragged its feet on structural reforms for 25 years of its independence, which pushed its economy into shadows, increased corruption and resulted in low living standards and poor competitiveness of the country.

"It is impossible to develop the country when we have an unstable banking system, unclear inflation processes, weak and closed economy, poor management of state-owned enterprises, and when we have pretty high levels of corruption and low confidence in the judiciary amid its inefficiency," said Groysman.

Ukraine will be able to achieve European living standards and economic growth, he said, "with its tremendous potential, natural resources with a reasonable, healthy governance".