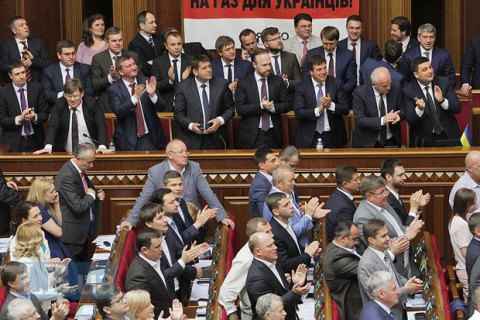 The Verkhovna Rada on 2 June made changes to the Constitution of Ukraine in terms of justice.

The bill №3524 garnered the support of 335 deputies with 300 minimum required.

The amendments, according to the deputy head of the Presidential Administration Olexiy Filatov, are aimed to ensure de-politicisation and independence of the nation's judiciary and give it "a fresh start".

The appointment of judges will be done by the Supreme Council of Justice (SCJ), a new body of the judiciary. The SCJ will carry out the selection of judges for all courts of Ukraine on a competitive basis; its decisions on the appointment and dismissal of judges are subject to further approval by the president. The SCJ will also address the issues of detention and arrest of judges.

The president submits proposals on the creation and liquidation of courts to parliament for approval.

The SCJ will be composed of 21 members, ten of whom are elected by the congress of judges, the president, Verkhovna Rada, Congress of Advocates, All-Ukrainian Conference of Prosecutors, and the Congress of Representatives of Law Schools and Research Institutions appoint two members each (the latter from among academic jurists).

The constitutional amendments limit the immunity of judges to their functional activities, i.e. for their courtroom decisions, but otherwise they are equated to ordinary citizens.

The constitution outlines the grounds for the dismissal of a judge, e.g. the judge can be dismissed if he or she cannot confirm the legality of their incomes.

Also, the amendments to the Constitution provides for qualification assessment of judges based on three criteria: professionalism, integrity and compliance with the rules of ethics.

The amendments related to justice also affect the prosecutor's office, whose main function will be to support public prosecution in court. The law underscores to the principle of equality of arms of justice i.e. prosecution and defence in litigation.

This is the sixth amendment of the Constitution of Ukraine, adopted in 1996.

In 2004, amendments were made as a result of the constitutional reform, which weakened the powers of the president.

In 2010, the Constitutional Court overturned this reform and restored the 1996 Constitution.

In 2011, amendments were made to the Constitution to prolong the term of tenure of Verkhovna Rada and local councils from four to five years.

In 2013, the Constitution was amended to expand the powers of the Accounting Chamber exercising control over the proceeds to the state budget, cancelled by the 2010 constitutional reform.

In early 2014, the Verkhovna Rada voted for the return to the Constitution of Ukraine of the 2004 edition.