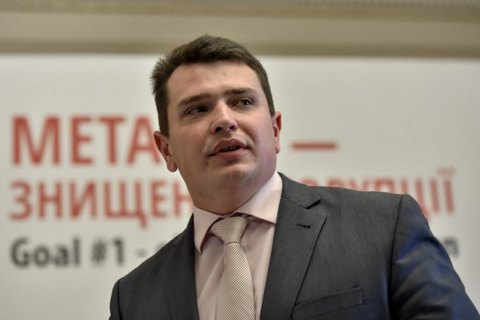 The head of the National Anti-Corruption Bureau of Ukraine Artem Sytnyk called on anyone who claims their signatures in the "black accounting" ledgers of the Party of Regions have been forged, to call in and provide the samples of his handwriting, NABU press office said in a release.

According to the Bureau director, it will facilitate the identification of persons and expedite the investigation.

As reported, the ledger that came into possession of the NABU contains 841 pages, filled by hand. The entries indicate the date, first name and initials, the amount of disbursed funds and a brief description of cost items. Each page contains approximately 30 entries. The records have been digitized on the equipment donated by the US Federal Bureau of Investigation.

On 28 May, Viktor Trepak, the first deputy chairman of the Security Service of Ukraine, head of the Main Directorate for Combating Corruption and Organized Crime handed over to the NABU documents revealing illegal cash payments by the Party of Regions to a number of the former and current high-ranking officials. According to Trepak, the documents are the "black accounts" of the Party of Regions indicating approximately 2 bn dollars in bribes.

On 30 May, the NABU has announced launching an investigation in this case. Apparently, in the second half of 2012, the Party of Regions has spent about 66m dollars to finance political activities of other political forces, including the Our Ukraine party and the Communist Party of Ukraine.