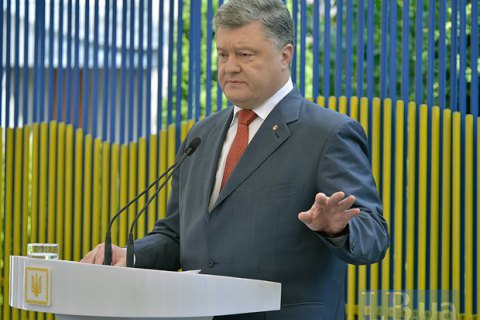 President Petro Poroshenko said that the support given by certain lawmakers that are former members of the Party of Regions for the amendment of the Constitution does not give them any absolution.

"The vote and the support of some people's deputies and factions does not mean that someone got an immunity from prosecution," Poroshenko said.

He stressed that he did not held secret talks with the Opposition Bloc, Will of the People and Renaissance, which now are embracing former "regionals".

"The dialogue that was held with the head of the Opposition Bloc faction [prior to the vote], was held in the presence of other heads of factions, the same is true about Will of the People and Renaissance," the president said.

He said that after the vote he called leaders of the opposition that supported the bill amending constitution to say thanks for yesterday's vote, "he said. "However, I did not call Lyashko [whose faction did not support the bill]," the president admitted

Poroshenko reminded that Ukraine now has a whole range of agencies that can investigate corruption and crime, and they are depoliticized.

"The changes are irreversible and neither parliamentary mandate nor ministerial portfolio or judicial robe, nor the prosecutor's chair will not save you from an effective investigation," he said.