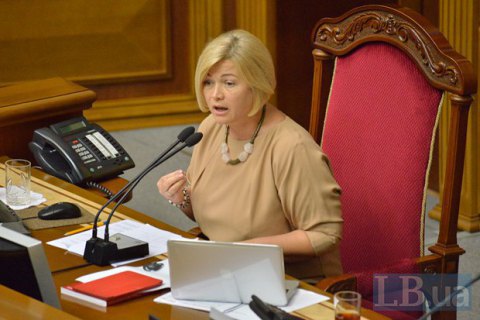 The militants in Donbass continue to block the exchange of prisoners and demand 600 separatists to be amnestied, the representative of Ukraine in the subgroup on humanitarian affairs in the Trilateral Contact Group on Donbas Settlement Iryna Herashchenko wrote in Facebook on 7 July.

"I have repeatedly, including during meetings with the mothers and wives of the hostages informed them, the society and the media that the militants block the release of hostages, demanding amnesty. They demand an amnesty for more than 600 of those who had violated Ukrainian law in the midst of the hostilities. An amnesty would automatically create the sense of impunity in these bandits," Herashchenko wrote.

She also said that militants refuse to provide information about the condition and whereabouts of 112 Ukrainians they hold, and block the search for more than 500 people who went missing.

"The claim they have only two dozen hostages in the "DPR", and the only one hostage in the in the "LPR" It is such a terrible and cynical story ... But we are fighting for the liberation of everyone," she wrote.

Earlier, representatives of the "LPR" and "DNR" in Ukraine are looking for 946 people who they believe are detained in Ukraine, and whom they plan to exchange for the hostages they hold.