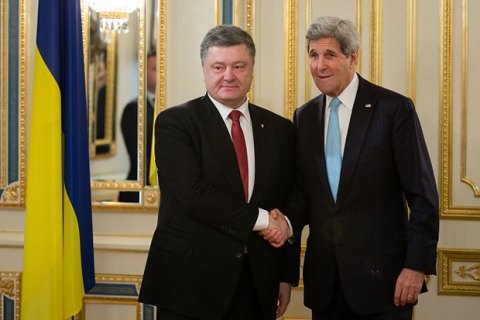 The US Secretary of State John Kerry called the cease-fire in Donbass the main condition for the implementation of the Minsk agreements, thus confirming the position of Ukraine.

The quickest way to resolve the conflict is to fully implement the Minsk agreements. There should be no doubt that this must be done - a real cease-fire, Kerry stated at a news briefing after the talks with President Petro Poroshenko on 7 July.

Secondly, an unlimited access of the OSCE to the entire territory of Donbass, the release of all the hostages, free elections in Donbas in accordance with the OSCE standards and the Ukrainian Constitution, the withdrawal of all military forces and weapons, the reinstatement of Ukraine's sovereignty within its borders, he went on to say.

Kerry stressed that the Minsk agreements cannot be implemented without a cease-fire. This was reiterated during a recent telephone conversation of US President Barack Obama with Russian President Vladimir Putin.

Previously, Putin demanded that Ukraine should carry out political clauses of the Minsk agreements, despite the continuing attacks of militants in Donbass.

US Secretary of State also added that the international sanctions against it will remain in force unless the situation in Donbass de-escalates.

On 28 June, President Poroshenko said that the changes to the Constitution in part of decentralization, which provide for a special status for a part of Donbass, will not be adopted until a number of conditions, including the cease-fire, are met.