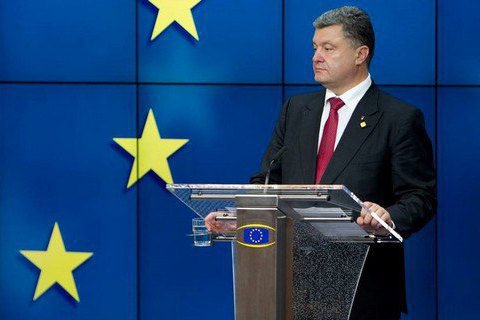 "After 59 years of the European project — the most successful in human history — many Europeans are less appreciative of what it brings (peace, stability, freedom of movement) than of what it takes (solidarity and patience)," Poroshenko argues in the article.

The president says that Europeans tend to forget of what war and authoritarianism can be, so they take peace and freedom for granted. "Nowhere in Europe will you see as much faith in the EU as you do in Ukraine. Not because we are not aware of the EU’s drawbacks, but because we are all too conscious of the alternatives. Wherever the European idea is in retreat, it leaves a vacuum that gets filled with something painfully familiar in Europe’s history: national egoism. The European idea does not get replaced with something new — far from it. It is replaced with greed and narrow-mindedness masked as pragmatism," Poroshenko believes. Ukraine wants to be a part of Europe because it wants to be a better country. " When we say we want in, we are not setting a goal for the EU. We are setting a goal for ourselves," Poroshenko stresses.

Europe, in turn, must say strong and consolidated, the president wrote. "Without a drive for freedom, without political courage or a vision for the future, Europe isn’t an entity, only a space. This is an option Euroskeptics are perfectly fine with. But is it a viable option, if we want a better future?" Poroshenko is asking .

In his words, whatever challenges Europe might face, now or down the line, it needs a sense of vision to stay attractive and on track. "We strongly believe that highlighting EU success stories like trade association agreements or visa liberalization for countries that have faith in Europe is the right reply to those who spread fear, despair and hatred in our common home," the president argues.

"We believe in Europe. We will faithfully stick with Europe. We see Europe for what it is: the only path to a better future and the only remedy for the disease of egoism and division that has cost our Continent millions of lives. As it turns out, even now, after decades of peace and prosperity, Europe isn’t immune. But it can and must fight this disease," he underscored, having added that Europe can and must fight this disease.

It’s time for those who have faith in the European project to take the lead, Poroshenko's article in Politico concludes.