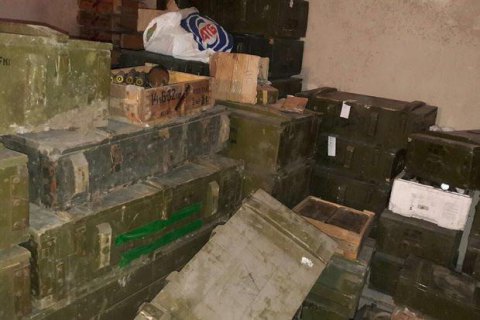 The Prosecutor-General's Office (PGO) and the Security Service of Ukraine (SBU) on Wednesday morning raided the base of the special patrol police regiment Dnipro-1 where they found a stash of allegedly decommissioned firearms and ammunition believed to be stolen and removed from the ATO zone, the PGO press service told Interfax-Ukraine on 6 July.

The weapons were planned to be trafficked to Kyiv, the head of the PGO department for particularly important economic crimes, Volodymyr Hutsulyak, told a news briefing.

"There are reasons to believe that a significant portion or all of these weapons was assigned to be moved to Kyiv across Ukraine," he said.

Hutsulyak said the proliferation of weapons and ammunition would have entailed grave consequences including a multiple increase in street crime.

He dismissed the statement by the regiment command that these weapons had been properly registered. "Weapons are not potatoes, there is a list of documents according to which it should be stored," he remarked.

Asked by Interfax-Ukraine if those involved in the illegal possession of weapons would be detained, Hutsulyak said that the special operation was in progress, and that law enforcers want to first and foremost find all the weapons which were improperly stored. "And then we will identify the range of persons involved in its storage and, possibly, proliferation. These people will be brought to justice."

Dnipro-1 was formed on the basis of a special battalion of militia and in September 2014 was converted into an army regiment.

In March 2015, several former members of Dnipro-1 were arrested in the course of an investigation into the murder of Viktor Mandzik, an SBU officer who was shot dead while trying to stop lorries with contraband bound for the territory of the self-proclaimed Donetsk People's Republic.