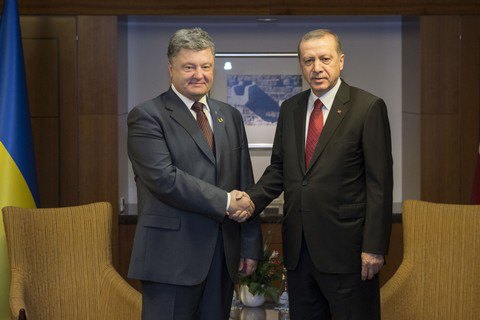 Ukrainian President Petro Poroshenko and his Turkish counterpart Recep Tayyip Erdogan met on the sidelines of the Warsaw NATO Summit on 7 July to discuss cooperation in security issues and touch on prospects for economic cooperation.

"Petro Poroshenko and Recep Tayyip Erdogan agreed to further coordinate actions in the sphere of regional security and intensification of economic cooperation between the two states. The parties also reached an agreement on holding the regular session of the High-Level Strategic Council under the co-chairmanship of the Presidents of Ukraine and Turkey in Kyiv. The heads of state instructed their foreign ministers to hold preparations to the given session," the Ukrainian presidential administration reported on Friday.

Erdogan emphasized that nothing would affect the reinforcement of the Ukraine-Turkey strategic partnership.

Poroshenko in turn expressed gratitude to the Turkish side for the recent decision to increase the period of visa-free stay in Turkey for Ukrainians from 60 to 90 days during the 180-day period. In this context, the Turkish president noted the increasing number of Ukrainian tourists.

During the meeting, Poroshenko also expressed condolences to the Turkish people over the Istanbul Airport tragedy.