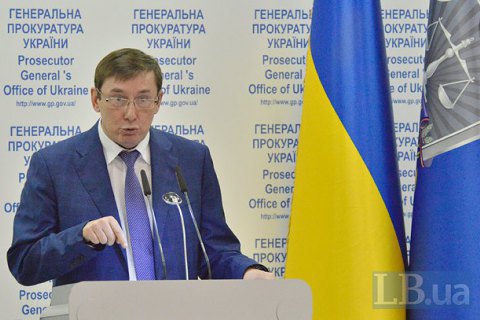 Prosecutor General Yuriy Lutsenko pledged a series of illustrative cases based on the income statements of officials.

"I want us to have a few demonstrative, successful stories before the end of this year, the cases that will demonstrate the equality of everyone before the law. I assure you that the Prosecutor General's Office will gladly dig into violations of the law that the agency would unearth," Lutsenko said during the presentation of the Unified State Register of Declarations on 12 July.

He assured that the first results of the investigations would be seen in October, when declaration are going to be submitted.

"For all the politicians who are worried about that, I would say that politicians are always trying to go down in history. The only chance to remain immortal is to fill in the electronic declaration right, because this is forever," Lutsenko said.

The chief prosecutor reminded that public prosecutors, just like any civil servants, will have to fill in electronic declarations.

"By all means, a prosecutor must be the first to show his income declaration, before investigating into others," Lutsenko said.

Under the law on electronic declarations, passed in March, the electronic system of declarations must be launched before the end of the year. For two months after the launch of the system, Ukrainian officials will have to submit their income statements via the detailed form on the special website.

The concealment of incomes in the declarations is considered a criminal offense.