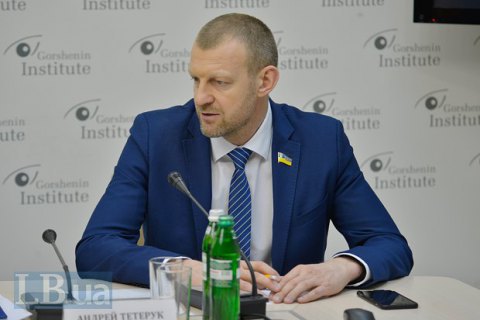 In a statement released by the press service of the People's Front party, he harshly criticized a recent interview by Sergei Karaganov, a Kremlin political analyst, in which he described the annexation of Crimea and the occupation of a part of Donbas "a great achievement of Russian politics."

"In Russia, some politicians and public figures play the role of Putin's dogs. They speak up his mind. Those are Zhirinovskiy, Karaganov, Mironov, Naryshkin and others. If the armed aggression against a sovereign state is an achievement, let Karaganov recognize that the assassination of opposition leader Nemtsov was a significant achievement of the Kremlin as well. It crashed the resistance of what was left of the Russian opposition," the politician wrote.

"Or take the raids of Putin's air force to peaceful Syrian cities that have killed thousands. This is how Putin helps his crony, the dictator Assad to avoid losing power and drives millions of refugees from their homes to the 'bad' Europe. Noteworthy, it's not the first trick of Karaganov, who has recently he gave an openly boorish interview to German Der Spigel, in which openly intimidated the whole world of Russian stupidity and brute force," wrote Andriy Teteruk.

The lawmaker believes that these statements are further proof that Ukraine should as quickly as possible to join NATO, and the Alliance must first pay attention to Russia rather than the Middle East.