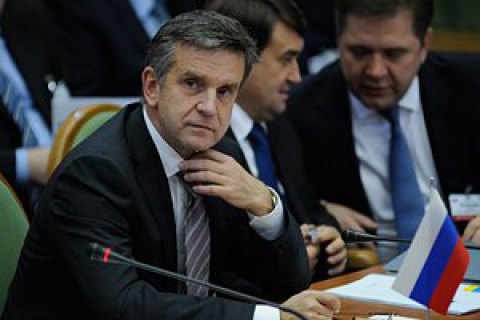 Zurabov was appointed Russia’s Ambassador to Ukraine in 2009 and presented his credentials in early 2010.

Mikhail Zurabov was born in Leningrad (now St. Petersburg) in 1953. In 1998 he was first deputy minister of health of the Russian Federation, then in 1998-1999 he worked as president’s adviser, while from 1999 to 2004 he was chairman of the board of the Russian Pension Fund.

Russia's RBC agency, reported that Mikhail Babich, who is now holding the post of presidential envoy in the Volga Federal District may replace Zurabov. Babich comes from the security forces. He served in the airborne troops and the KGB, and briefly led the aviation corporation Antey. After that he served as an aide to the head of the FSB Border Guard Service. From 2003 to 2011 Babich was a deputy of the RF State Duma. In the past five years he served as presidential envoy in the Volga Federal District.

On February 23, 2014, Ambassador Mikhail Zurabov was recalled to Moscow. Thereafter, Charge d'Affaires of the Russian Federation in Ukraine was Andrei Vorobyov, who died on May 30, 2016. In June 2014, the Russian Embassy in Ukraine reported that Zurabov has returned to Ukraine. However, the information about Zurabov's work was very scarce.