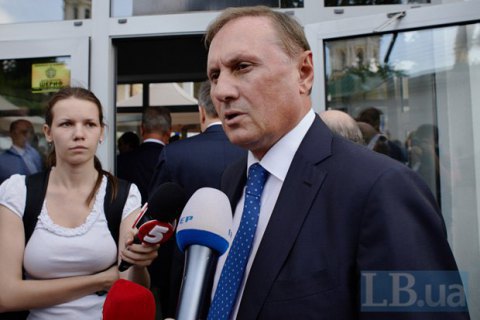 Kyiv's Pecherskyy district court will select a measure of restraint for Oleksandr Yefremov, the former leader of ex-President Viktor Yanukovych's Party of Regions faction in parliament, on 1 August, according to RBC-Ukraine.

Prosecution is expected to demand that Yefremov be arrested for two months. The court session will be held amid tight police presence.

Activists on social networks are calling for an indefinite rally to put public pressure on court to have Yefremov arrested. The calls are shared under the hashtags #StopYefremov and #StopSeparatism.

Yefremov was detained on 30 July onboard an Austrian Airlines flight.

Prosecutor-General Yuriy Lutsenko said his office had direct evidence of Yefremov's involvement with the self-proclaimed separatist Luhansk people's republic; taking possession of the Luhanskvuhillya coal company through abuse of office; taking deliberate actions with a view to changing Ukraine's territorial borders which caused human casualties and other grave consequences.

Bail is not envisaged under these charges.

Prosecutors believe Yefremov was fleeing the country to Vienna where his son lives.

Yefremov was already detained on 14 February 2015 within the case on the so-called "dictatorship laws" of 16 January 2014. However he was released on bail.

In late March, the Prosecutor-General's Office closed a criminal case against Yefremov on feeling ethnic hatred.