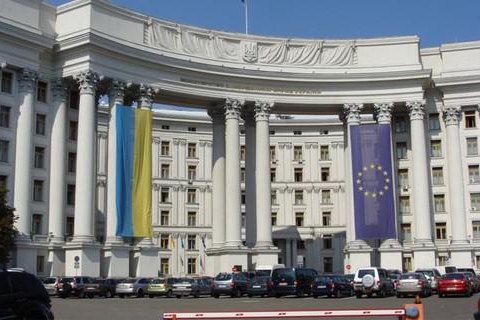 The Ukrainian Foreign Ministry has sent a note of protest to Moscow over its inclusion of the occupied Autonomous Republic of Crimea and Sevastopol into Russia's Southern Federal District.

"This decision is despicable and will ensue no legal consequences at all. Neither will it affect the status of the Autonomous Republic of Crimea and the city of Sevastopol and the internationally recognised border of Ukraine," the ministry's statement reads.

The ministry said that the occupying state continues to flagrantly ignore the UN Charter, the United Nations General Assembly Resolution 68/262 "Territorial integrity of Ukraine", the Helsinki Final Act, 1975, the 1994 Memorandum on Security Assurances in connection with Ukraine's accession to the Treaty on the Non-Proliferation of Nuclear Weapons, its commitments under the 1997 Agreement on Friendship, Cooperation and Partnership between Ukraine and Russia and other international legal acts.

The Ukrainian Foreign Ministry has called on Russia once again to resume honouring its international commitments. stop the aggression and illegal occupation of a sovereign territory of Ukraine.

Ukraine expects the sanctions on occupied Crimea to extended to the Southern Federal District now that the peninsula was included there, the Interfax-Ukraine news agency quoted Ukrainian Deputy Foreign Minister Sergiy Kyslytsya as telling journalists on 28 July.

Earlier on 28 July, Russian President Vladimir Putin cancelled the status of a federal district for Crimea and included it into the Southern Federal District.