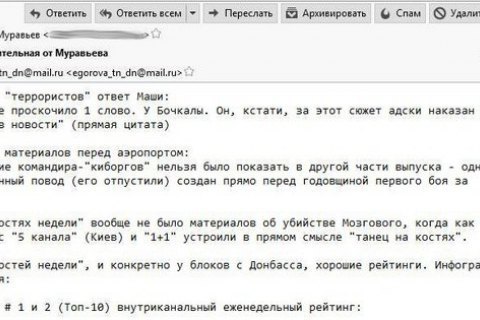 Email correspondence between an employee of "the state security ministry of Donetsk People's Republic" Tatyana Yegorova with Russian journalist Leonid Muravyov and the workers of TV channels Inter and Donbass (founded by TRC Ukraina) made it to Internet last week and was posted on a public file sharing platform.

Muravyov has reportedly tried to get a job with Inter, a channel with nationwide coverage, but was extradited from Ukraine in March 2015. In an email to Muravyov dated May 2015 (which may mean that he still worked for Inter at that time), Yegorova mentioned a certain Masha. Most likely, she referred to the former creative producer of Inter's weekly political program Maria Stoliarova.

Currently, the archive of Yegorova's emails has been removed from the file sharing service, but some screenshots remain.

In another letter, the host of The Human Factor show on Donbas TV channel Serhiy Karpiy requests Yegorova to approve a report intended for TRK Ukraine.