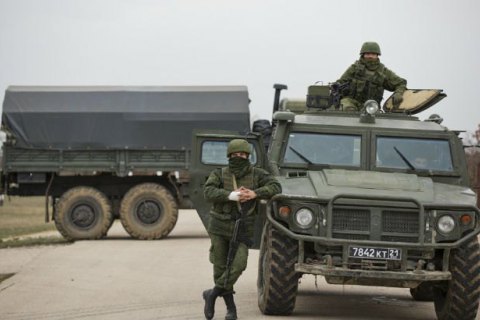 The shoot-out between servicemen of the Russian Armed Forces and the Russian Border Troops near Armyansk in the early hours of 7 August happened because they could not recognise each other, a spokesman for the Main Intelligence Directorate of the Ukrainian Defence Ministry, Vadym Skibitskyy, has said at a briefing, according to Krym,Realii.

"The main reason is that these unites could not timely identify each other by the principle 'friend-or-foe'. Fire to kill was opened by both sides. There were killed and wounded," he said.

As reported earlier, on 7 August, Russia suspended the work of all checkpoints in Crimea because of the alleged shoot-out, which was heard on Ukraine's administrative border with Crimea. There were no Russian official reports on the incident. Three days later, the FSB accused the Ukrainian Defence Ministry's Main Intelligence Directorate of plotting terrorist attacks in Crimea, as later did Russian President Vladimir Putin. Also, the FSB announced the capture of an alleged Ukrainian subversive group.

However, LB.ua reported that, according to search warrants posted across the peninsula, Russian servicemen were at large and wanted.