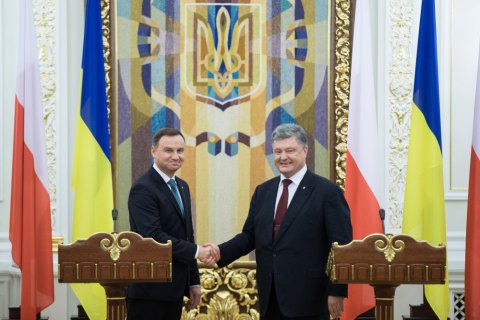 Ukrainian President Petro Poroshenko and the president of the Republic of Poland, Andrzej Duda, have appreciated the efficiency of the Ukrainian-Polish-Lithuanian brigade, where soldiers jointly implement the NATO standards of operations.

Poroshenko underscored the importance of launching new traditions with the president of Poland viewing the Ukrainian military parade along with him.

Poroshenko noted that the Ukrainian-Polish-Lithuanian brigade took part in the parade. “This is its first appearance in public. And I liked it very much. They looked worthy,” he said.

He mentioned that the foreign partners had already been expressing their interest and willingness to learn on the experience of the Ukrainian-Polish-Lithuanian brigade and to launch similar military detachments in their countries.

“In my opinion, these are the first outcomes of the European, Euro-Atlantic integration of Ukraine. The results of our cooperation in the defense and security sector. This is extremely fruitful cooperation,” Petro Poroshenko stressed.

In his turn, President Duda thanked him for the invitation to take part in the festivities on the occasion of the 25th anniversary of Independence of Ukraine. “Mr. President thank you for the opportunity to stand together today bowing our heads in tribute to the memory of those who perished for the independence of the Ukrainian state, the Ukrainian soldiers who died defending Ukraine,” Duda said.

He also thanked the head of the Ukrainian state for opportunity for the Polish soldiers to partake in the Independence parade as a part of the Ukrainian-Polish-Lithuanian brigade, where our soldiers have been jointly implementing the NATO standards of military troops operations.

“This is also an obvious sign of Ukraine’s approximation to the North Atlantic Alliance,” Duda believes.

Andrzej Duda noted that he is glad to see the Polish flag at the parade close to the flags of the heroic units defending today the independence of Ukraine as this is the flag of an ally-country, which supports independence and the European and the Transatlantic aspirations of Ukraine.

The President of Poland underscored that his state supports the European and the Transatlantic ambitions of Ukraine. He reminded that, during the NATO summit in Warsaw, the security issue of Ukraine and thus the entire Eastern Europe, was a very important part of all meetings and consultations of the partner countries’ representatives.

Andrzej Duda expressed his hope that the package of support to Ukraine approved at the summit would be of significant help to our country while developing the regional security, which is a component of the European security.