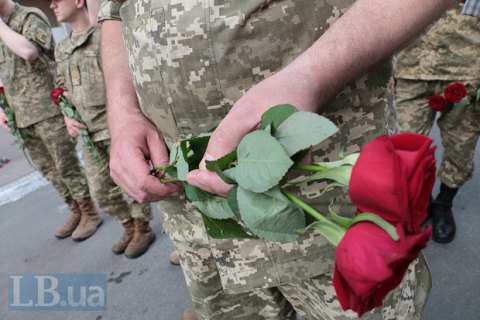 President Petro Poroshenko has said that 2,504 have been killed in action since the start of the antiterrorist operation (ATO) in Donbas in 2014.

Poroshenko was speaking at the military parade in Kyiv on the occasion of the 25th anniversary of Ukraine's independence.

"Looking back at over two years of war, we can confidently say that the enemy has failed to carry out any strategic task, has failed to put Ukraine on its knees. This is what our 2,504 servicemen have died for. We are lowering our heads in the memory of the heroes who gave their lives for the peaceful life of Ukraine," he said.

A minute of silence was observed for the fallen soldiers.

"In 2014-16, military recruitment offices have registered 300,000 people on their way to the front line. First, these were volunteers, then mobilized servicemen and now contract troops. Had we moved by last year's inertia, we would have had the ninth wave of mobilization, but we haven't even had the seventh one yet," Poroshenko recalled.

According to the UN statistics, 31,690 people were affected by the conflict in eastern Ukraine, of them 9,553 were killed and 22,137 wounded. These figures include servicemen, civilians and militants.