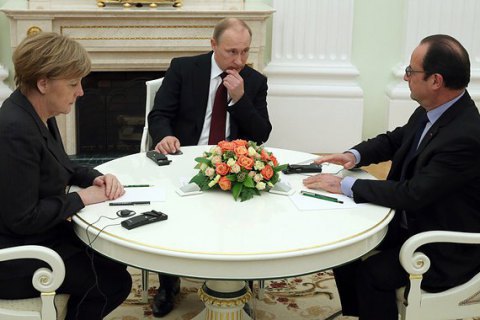 Russian President Vladimir Putin, German Federal Chancellor Angela Merkel and French President France Francois Hollande have agreed to meet on the sidelines of the upcoming G20 summit in China on 4-5 September, the Kremlin press service following a phone conversation between the three leaders on 23 August.

"President of Russia Vladimir Putin updated his colleagues on the crude provocation by Ukraine, which sent a group of subversives in early August to stage terrorist attacks in Russia [Russia-annexed Crimea]. Kyiv’s use of such forceful measures is directly harming the Minsk process and cooperation within the Normandy format," Putin's press service said.

Putin once again demanded "formalising the special status for Donbas, implementing a constitutional reform and amnesty, as well as holding local elections". "All these issues should be coordinated within the contact group, where Kyiv can talk directly with Donetsk and Luhansk," it said.

However, according to the French president's press service, Hollande "hoped that the conditions are quickly met to allow the holding of another meeting of four to discuss the next steps for the settlement of the crisis", which suggests Petro Poroshenko's participation.

Hollande recalled the consistent position of France that the annexation of the Crimea cannot be recognized and expressed concern about the escalation of tension in the recent weeks.

He said the escalation could put the entire process at risk and stressed that there is no alternative to a peaceful resolution. He called on all the parties concerned to implement the commitments that were made as part of the Minsk agreements, both in terms of security and political issues.