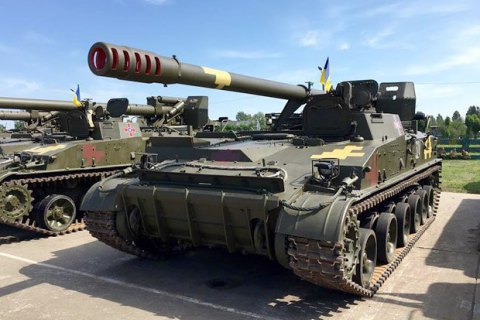 Ukrainian President Petro Poroshenko has stated the need for bolstering the might of the Ukrainian army at a Tuesday ceremony in Chuhuyiv, Kharkiv Region when military hardware was transferred to units fighting in Donbas."I believe that this ordeal will be followed by peace, prosperity and European perspective, and the weapons and military hardware you have received will definitely draw nearer the day of our victory," Interfax-Ukraine quoted him as saying.

Ukrainian defence plants built, modernized and delivered to the army over 1,000 units of armaments and military hardware in 2016, he said. "Streamlined military-technical cooperation provided Ukraine with over 700 pieces of military and special-purpose hardware - sets of radar and counter-battery stations, unmanned aerial vehicles, thermal imagers and communication systems," he said.

A batch of 141 weapons and military hardware units made in Ukraine is being supplied to the front, the Ukrainian president said.

"We will continue to demonstrate the fruit of our defence industry. Every citizen should see the hardware and weapons they are investing in by paying taxes," the president said.

Two years of the armed conflict in Donbas "gave Ukrainian servicemen a unique experience, which will lay a foundation for our defence and our armed forces in the upcoming decades," Poroshenko said.

"It is also clear who will be our enemy throughout that period; this is written in every strategic document pertaining to national security and defence," Poroshenko said.