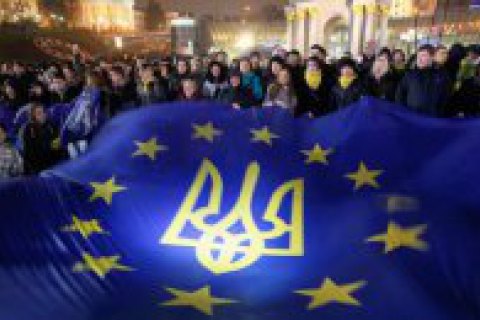 For the past 25 years of Ukrainian independence, the country’s most consistent foreign policy priority has been to escape from the Kremlin orbit and return to the European family of nations. This escape bid has repeatedly failed due to a number of factors, primarily the weakness of the Ukrainian position and indecision among the country’s potential Western partners. For extended periods, the Ukrainian authorities have also sought to balance between Russia and the Western powers, seeking advantages from both sides while committing to neither.

As Ukraine marks 25 years of independence, the country is closer than ever to succeeding in its bid to break out of the Russian orbit. The issue is far from settled, but Ukraine has made more progress towards Western integration in the past two years than in the previous 23 years combined. At the same time, Ukraine finds itself having to fight against aggressive Russian opposition to the country’s Western course.

The indecisiveness of the West is also an increasingly important factor in this process. The mood of indecision has only intensified following recent anti-EU referendums in the Netherlands and the United Kingdom, the rise of Donald Trump in the US, and the refugee crisis across the Europe. Ukraine’s bid for European integration could hardly have come at a worse time.

In order to understand where Ukrainian foreign policy is heading, it is worth looking at the paths chosen by each of the country’s five presidents.

Ukraine’s first post-Soviet president was also the country’s last communist era leader. This continuity says much about the lack of fundamental change in 1991. Nevertheless, Leonid Kravchuk takes credit for overseeing what was in many ways a remarkably civilized divorce with Russia. He did so in a largely unsympathetic international environment. When Ukraine declared independence, there was no expectation of major support from the West. On the contrary, many remembered the discouraging words of US President George H. W. Bush in his infamous ‘Chicken Kiev’ speech on 1 August 1991, when he came to Kyiv and warned Ukrainians against ‘suicidal nationalism’.

Kravchuk’s first major achievement was the establishment of the Commonwealth of Independent States (CIS), a development that marked the final death of the Soviet Union. Crucially, he resisted efforts for the CIS to include a joint currency and joint armed forces, thereby greatly reducing its stature and protecting Ukraine’s fledgling independence.

One of the thorniest issues Kravchuk faced during the breakup period with Russia was over the status of Crimea in general, and the Soviet Black Sea Fleet in particular. Crimean separatism flared up in the early 1990s and remained a challenge throughout Kravchuk’s presidency. The redistribution of the Black Sea Fleet and the presence of the Russian Navy at Sevastopol would also dog Kravchuk until he left office. Nevertheless, Kravchuk managed to avoid open conflict with Russia and steered Ukraine through the volatile early years of independence intact.

Kravchuk was also one of the driving forces behind Ukraine’s unilateral nuclear disarmament, initiating processes that would culminate in the Budapest Memorandum of 1994. Many regarded this step as advantageous because it helped secure better terms of partnership with the West, but it backfired disastrously in 2014 when Russia unilaterally broke its commitments to respect Ukrainian territorial integrity and attacked the country.

Kuchma is Ukraine’s only two-term president. During his ten years in office, his foreign policy trajectory took all manner of twists and turns. Kuchma is regarded the father of the so-called multi-vector foreign policy – a strategy of maneuvering between Russia and the West. He won election on the back of pro-Russian rhetoric, which helped him to ease tensions with Russia. Separatism in Crimea fizzled out, while the redistribution of the Black Sea Fleet was completed. A major Treaty of Friendship and Cooperation between Ukraine and Russia was signed in 1997, settling a wide range of contentious issues and seeming placing relations on a sound footing.

Kuchma then won reelection in 1999 on a nominally pro-Western ticket, resoundingly defeating the Communist Party leader. He laid the groundwork for closer cooperation with NATO, and began building ties with the European Union. Kuchma’s pro-Western policy soon faced problems due to a series of scandals including the murder of a prominent opposition journalist in Kyiv and the sale of prohibited air defence systems to Saddam Hussein’s Iraq. As he became increasingly isolated from the West, Kuchma once more sought closer ties with Moscow. He announced his intention to join the Russia-led Common Economic Space (CES) and backed the pro-Russian Viktor Yanukovych as his anointed successor in 2004. Towards the end of his ten-year reign, he also rejected the policy goals of NATO and EU membership, dismissing them somewhat unconvincingly as irrelevant issues.

Yushchenko came to power thanks to the 2004 Orange Revolution. These mass protests erupted over massive vote fraud, but they also reflected deep-seated frustration with Ukraine’s failure to make the transition from Soviet authoritarianism to European democracy. Yushchenko soon restored Ukraine’s pro-Western course, making NATO and EU membership official policy objectives. This was broadly popular – especially with young and middle class Ukrainians – but it also brought him into direct confrontation with Russia.

Yushchenko’s bold foreign policy plans made headlines but they did not bring results. His domestic position significantly weakened following the 2006 parliamentary vote, which allowed Orange Revolution villain Viktor Yanukovych to make an unlikely comeback. Internationally, Ukraine’s EU partners were wary of an increasingly resurgent Russia and cautious of aggravating the dangerous mood of EU enlargement fatigue that gripped much of Western Europe after to the expansion of the European Union in 2004. At the 2008 NATO summit, Vladimir Putin was able to ally with Germany’s Angela Merkel and France’s Nicolas Sarkozy to block any membership invitation for both Ukraine and Georgia. Within months, Russian tanks were rolling into Georgia. Yushchenko backed Georgia in its confrontation with Moscow, thus cementing his place on the Kremlin Parthenon of anti-heroes.

It has become routine to depict Viktor Yanukovych as a Kremlin puppet. However, in many ways, his initial foreign policy was an attempt to return to the multi-vector strategies of the Kuchma era. He officially abandoned Ukraine’s NATO membership ambitions and embraced non-aligned status, but continued the process towards a European Union Association Agreement initiated during the Yushchenko presidency.

Ending Ukraine’s NATO membership flirtation was a big win for Moscow. The Kremlin also gained a 25-year extension on the lease of the naval port at Sevastopol, keeping the Russian Black Sea fleet in Ukrainian waters until 2042. These concessions to the Kremlin fuelled domestic criticism of Yanukovych – especially as they came in tandem with repressive domestic measures that mirrored similarly anti-democratic policies championed by Putin. Nevertheless, Yanukovych continued to champion the country’s European trajectory and reiterate his intention to conclude the long-awaited EU Association Agreement. Weeks before the document was due to be signed, he reversed his position, citing unfavorable terms and Russian pressure. Brussels was shocked. Ukrainians took to the streets in protest. When he finally ran out of domestic allies, Yanukovych fled to Russia, where he remains to this day.

Poroshenko came to power with the most decisive pro-European mandate of any Ukrainian leader. He won majorities in every single Ukrainian oblast with a campaign that explicitly positioned him as the champion of the pro-EU Euromaidan Revolution. His first major act was the signing of the EU Association Agreement. He has since managed to craft a series of international alliances, placing Ukraine far closer to the top of the geopolitical agenda than it has ever previously been.

With the West determined to restrain a revanchist Russia, Poroshenko has been able to secure significant financial, diplomatic and technical support for Ukraine while also gaining widespread backing for the country’s Euro-Atlantic integration. However, there are limits to this support. Financial aid has not been overwhelming, while subjects such as NATO and EU membership remain off the table. Indeed, even the issue of visa-free EU travel for Ukrainian citizens remains unresolved, despite Ukraine complying with all requirements.

While the West hesitates, Russia continues to employ spoiling tactics. The hybrid war in eastern Ukraine keeps the country destabilized, while the Kremlin also works hard to dissuade the West from supporting Ukrainian integration ambitions. These destructive tactics have failed to derail Ukraine’s westward trajectory, but this will not prevent the Kremlin from continuing. Ukraine is now closer than ever to escaping from the Russian orbit, but this historic process remains under threat. Experience suggests it will fail once again if Ukraine does not receive the support of the entire Western world.