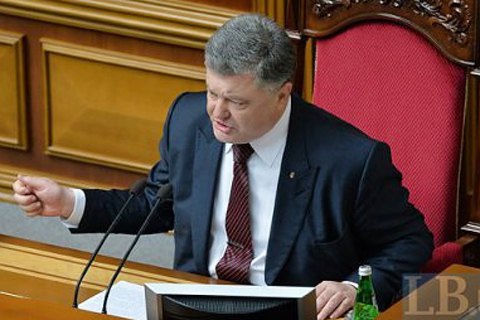 Ukraine has lost 15 bn dollars from closed access to Russian market, President Petro Poroshenko said as he addressed the parliament on 6 September.

"In addition to military intervention, Russia wages economic aggression against our country. In the beginning of the decade, almost a third of Ukrainian exports were to Russian markets. Kremlin's attack began even before the Maidan," said Poroshenko, whose confectionary business was among the first targets of Kremlin's trade wars.

"There were restrictions imposed, which in 2013 resulted in a 15-percent drop in Ukrainian exports to Russian Federation. In 2015 our exports to Russia fell by a half over the previous year. This is not the bottom yet as the dive continues today - minus 34 per cent in the first half of the year. Russia's share in Ukrainian exports dwindled to 9 per cent and falling," Poroshenko said.

In the last few years the volume of Ukrainian exports to the Russian Federation dropped five times, said Poroshenko.

"And although it may be good strategically that we have drastically reduced our dependence on the Russian market, which is regulated not by laws of economy but by political blackmail and imperial pressure. However, we need to realize that Russia's aggressive closure of its market has come as a true economic shock to Ukraine. It has cost us, by some estimates, at least 15bn dollars," president said.

We are talking about thousands of jobs, Poroshenko stressed.

"Why did Russia do that? At first, it started this policy to disrupt [Ukraine's] signing of the Association Agreement with the EU. Then it identified more ambitious targets: to strangle Ukraine economically, hit the finances, cut down our defense and political capacity through the deepening of the social crisis, to increase tension in the society, heat up dissatisfaction with the authorities and instigate protest moods. They dream of an early election to eliminate the so-called "Kyiv regime" they hate so much," said Poroshenko.

Poroshenko insisted that Ukraine should spare no efforts to reorient its exports toward the European Union and the countries of the East and South-East Asia.