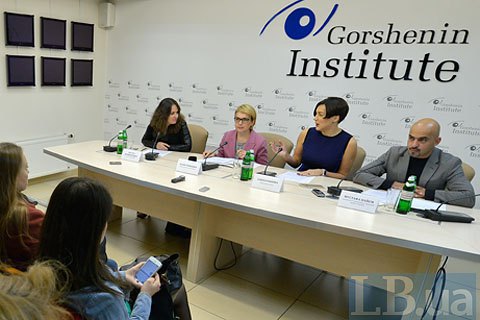 In the summer of 2017, about a thousand foreign volunteers will come to teach Ukrainian schoolchildren English language within th eGoCamp initiative. The registration of volunteers starts on 10 October at gocamps.com.ua website.

"We have a very ambitious goal of embrace 100 thousand children. Of course, this is only a goal, but you need to set a big goal and aim high. We'll see how far we can go," Education Minister Liliya Hrynevych told a 7 October briefing at Gorshenin Institute.

The minister stressed that these language camps will be useful both for students and teachers. Ukrainian teachers will master new methods of teaching English. "For us it is important to use all the levers for this project to reach out as many children and teachers as possible because it brings the real bonus. This is why we undertake organizing efforts. Unfortunately, we are unable to give it an essential financial support," she added.

One of the initiators GoCamp, MP Mustafa Nyem said that the project needs workspace rather than financial resources. He expressed hope that the project will become a year-round event, and all 1.5 million Ukrainian students aged 10 to 15 years will be able to pass through these camps. This requires some sort of a countryside recreation facility that could host GoCamp.

"If the state provided us such a facility, I'm sure we would have found the money for its reconstruction, even without taking it over from the state," Nyem said.

The lawmaker stressed that the English language it is not just a communication tool, but also a way to get acquainted with the new world.

"For children, it opens a new vision of the world and teaches critical thinking. I am confident that if we started this project ten years ago, there would be no war in our country, no separatism and all those things that are taking place in the East," Nyem said.

The director of the public association Global Office Oksana Nechyporenko, in turn, said that while the whole methodology GoCamp is designed only for the English language, but the project plans to run camps for German and French languages as well.

In 2016, a pilot project GoCamp was attended by 9,000 children from 126 schools across Ukraine. In 2017, it is planned to implement three such projects: GoCamp - schoolyard language camps across the country, AfterSchool GoCamp - after-school language programs in Kyiv and Kyiv region, GoCamp East – and extramural language program for children from Donetsk and Luhansk regions.