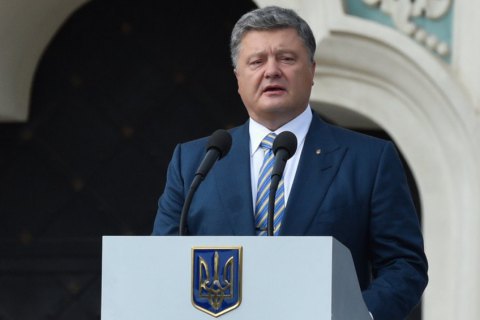 "As the commander-in-chief, I have no plans to announce the mobilization of the seventh wave. We are not going to withdraw workers from manufacturing companies. We do realize that the security and defence of the state is an extremely important task, but raising the economy is very important as well," the president said 11 October at a meeting of the Board of Regional Development as quoted by the TV channel 112 Ukraine.

Poroshenko stressed that the heads of local administrations, regional councils and mayors should ensure a decent accommodation for the demobilized soldiers, including the allocation of land plots.

The president reminded that army recruits will no longer be sent to the zone of the antiterrorist operation in Donbass.

On 26 September, Poroshenko signed a decree on dismissal of the military called up within the sixth wave of mobilization (June-August 2015). Once the last sixth wave conscript is dismissed, only contractor soldiers will serve in the combat zone.

Previously, the Ministry of Defense amid a successful recruiting campaign denied the need for a new wave of mobilization for.