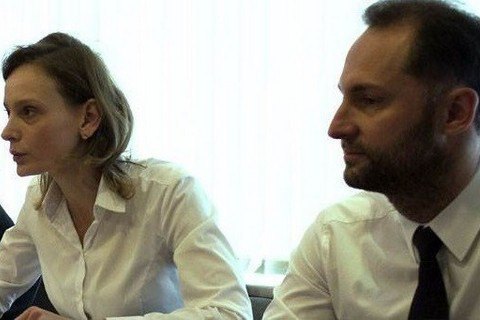 Viktoriya Romanova and Oleksandr Kharebin, executive producers for the 2017 Eurovision song contest Ukraine is hosting this year, and several other team members have officially announced they are quitting the project and will no longer be involved in preparations for the contest.

In a statement they made on 13 February, they explained that in December 2016, they were "deprived of authority when a new, actual head of the contest in Ukraine was appointed and given full control over all aspects of the Eurovision in Ukraine."

Although they did not name the person, the Detector Media website noted that on 15 December 2016, a deputy director-general of the National TV Company of Ukraine, Pavlo Hrytsak, was put in charge of the production of music and sports shows, documentaries and preparations for the 2017 Eurovision song contest as well as for commercial operations of the National TV Company of Ukraine. He was the executive producer for the 2005 Eurovision also hosted by Ukraine.

Later on 13 February, Deputy Prime Minister Vyacheslav Kyrylenko said the producers' decision to quit will not affect "the quality of the song contest", according to a report on the Cabinet of Ministers website.