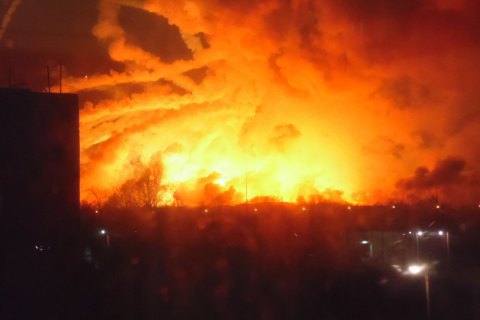 In the early hours on Thursday, military warehouses in Balakliya, Kharkiv Region, were caught on fire which followed by the detonation of ammunition, the State Service for Emergency Situations said in a release on 23 March. About 15 thousand people are being evacuated from the danger zone, including the city of Balakliya and nearby settlements. The movement of passenger transport along the railway station of Balakliya is halted and organized according to an emergency plan.

"As of 7:00 local time on 23 March , explosions of varying intensity continue on the territory of the military depot," the report says.

The Chief Military Prosecutor Anatoly Matios said the explosion and fire were caused by sabotage at 3am local time.

"According to preliminary information of the investigative-prosecutorial group of military prosecutors of the Kharkiv garrison and the investigation department of the SBU in Kharkov Region working on the scene […]. There was an explosion and a fire broke out at several sites of the storage of rocket and artillery weapons (125- and 152-mm armoured and artillery shells), which caused the detonation of munitions," Matios wrote in facebook .

The largest munitions arsenal in Ukraine with the total area of 368 hectares stored 138 thousand tons of ammunition. The most dangerous of them are the shells for the self-propelled guns Acacia, with the impact zone of up to 20 km.

There have been no immediate reports of civilian casualties.

In October 2015, a massive fire broke in defence warehouses near Svatovo, Luhansk region. Almost 3.5 thousand tons of ammunition were stored in warehouses. The incident took lives of three soldiers and a local resident.

The fire was eliminated in 24 hours.