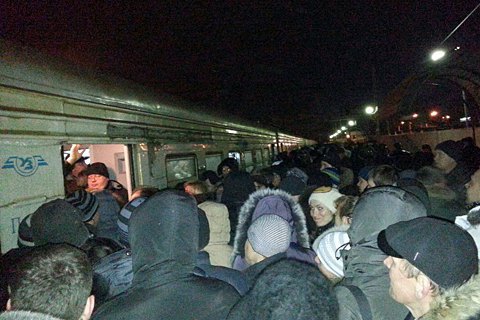 The residents of the village of Baryshivka, Kyiv Region, blocked the railway tracks at six in the morning on Wednesday, after some were unable to cram into a commuter train to the capital.

According to the press service of the nation's railway operator, Ukrzaliznytsya , the traffic was blocked for more than two and a half hours.

The incident was amid the ongoing strike of city shuttle drivers in the region. The drivers and their firms protest against the pressure of regional administrations that force the shuttlers to lower fares. Today, the commuters who could not take the maxi-taxis went to the railway station in an attempt to go to Kyiv.

"However, the commuter train could not accommodate an increased number of passengers, so the indignant people surrounded the train and took to the rail tracks, thereby blocking its movement," Ukrzaliznytsya said.

The two and a half hour blocking caused the delay in the movement of other inter-city and commuter trains.

Ukrzaliznytsya promised to look into the possibility of increasing the number of train cars on this stretch. Currently, the commuter timetable on the section Kyiv-Darnytsya-Yahotyn-Hrebinka provides for 12 pairs of suburban trains that usually full to 80% of the capacity.