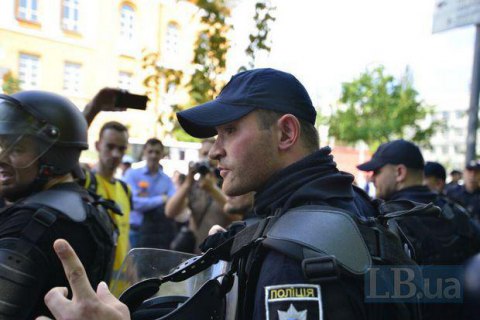 The officer who confronted the correspondent
Photo: Max Trebukhov

LB.ua photo correspondent Maksym Trebukhov has said he was attacked by police officers after the 2017 Equality March/Kyiv Pride on 18 June.

He said he stopped at the National Shevchenko University, where police had blocked right-wing protesters, to check out the situation there.

“We noticed cops trying to detain someone. I lifted the camera to shoot this. A representative of police came running to me at once without any insignia, badge or labels, wearing protective gear and a helmet, who tried to prevent me from shooting,” he said.

“When I said that I was a journalist - my [press] card was hanging from my neck - and when I mentioned that his actions violate Article 171 of the Criminal Code, he started hitting the camera and attempted to seize it. I took the card in my hand and showed him that I am a journalist, while grabbing the camera to prevent it from being snatched. Another representative of police hit me in the body several times in the meantime,” he said.

Trebukhov managed to get away from a police crowd (getting a few kicks on the way) and filed a complaint with the patrol police which arrived at the scene on his call.

While two police officers were involved in the incident, others were blocking access to him and did not try to stop their colleagues, he said.