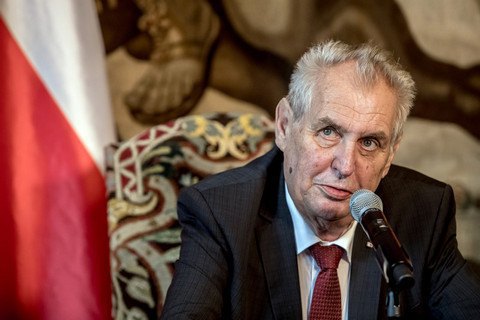 The President of the Czech Republic Milos Zeman in fact advised Ukraine to give up Crimea in exchange for compensation from Russia as he spoke at a session of the Parliamentary Assembly on 10 October.

"The President of the Czech Republic has just insulted Ukraine at the PACE session in Strasbourg. In response to my question about Crimea, he said that Crimea was annexed illegally but should not be returned to Ukraine. "Let Ukraine and Russia agree on compensation, financial, for example," Ukrainian MP Oleksiy Honcharenko wrote on Facebook.

First Vice-Speaker of the Verkhovna Rada MP Iryna Herashchenko described Zeman's statement "terrible in its cynicism" and reminded that Zeman has vigorously "promoted Putin" and called for an immediate lifting of sanctions, because "they do not work and are hit the EU rather than the Russian Federation."

"It's so sad to witness a total political degradation and a shame to look at the Czech delegation, which felt awkward and uncomfortable by this flow of unscrupulousness and lack of morals and principles. I am even more disappointed to hear the applause of some Europeans who were heard in the hall during Zeman's speech," she said.

It is not the first time that Zeman is makes such statements. Last, the Chezch president said that "the Soviet leader Nikita Khrushchev made an unforgivable stupidity by "giving Crimea over to the Ukrainian SSR, and that "Crimea cannot be returned to Ukraine." Zeman has repeatedly opposed the EU sanctions and regularly expresses pro-Russian views.

Czech government, unlike the president, supports the EU's common position on sanctions against Russia in response to the annexation of Crimea and the conflict in Donbas.