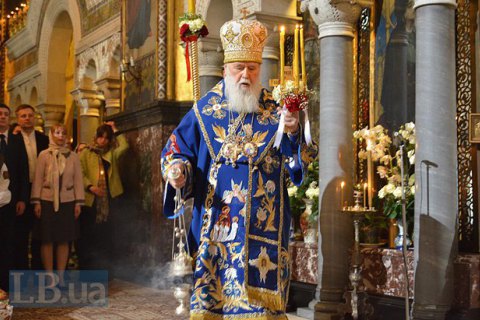 The Holy Synod of the Ukrainian Orthodox Church, Kyiv Patriarchate (UЩC-KP) will consider at the next meeting the desire of the Russian Orthodox Church to engage in a dialogue. In a press release UOC-KP on 30 November UOC-KP stated that the letter of Patriarch Filaret to the ROC and its leader Kiril was initiated by the Moscow side, its purpose was to create prerequisites for the recognition of the autocephaly of the Ukrainian Church by the ROC.

"The immediate subject of the dialogue is to overcome the whole complex of problems that interfere with the normal ecclesial communion between the ROC and the UOC-KP, as it should be between the local churches," reads statement.

It response to this desire and wishing to demonstrate goodwill, Ukrainian Patriarch Filaret sent a letter to Patriarch Kiril, the release said.

This letter took into account the wish of the Moscow Patriarchate to "get around sharp angles" in order for both sides to have the opportunity to "save face" in the dialogue.

The statement notes that the letter does not refer to a request for pardon from Patriarch Filaret.

Earlier, the Metropolitan of Kyiv and All Ukraine Onufriy at a meeting of Bishops asked to emphasize the special status of the Ukrainian Orthodox Church of the Moscow Patriarchate in the Russian Orthodox Church's charter. The proposal was adopted unanimously.

Filaret was the Metropolitan of Kyiv and All Ukraine until 1992, when he and his supporters formed the Ukrainian Orthodox Church of the Kyiv Patriarchate. The Moscow Patriarchate excommunicated Filaret and anathematized him as a "schismatic".