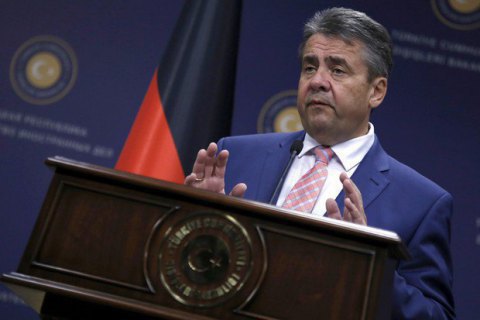 German Foreign Minister Sigmar Gabriel on the eve of a two-day visit to Ukraine said that the conflict in Donbas is "neither frozen nor forgotten".

"We do not consider this conflict neither frozen nor forgotten, and is extremely topical and extremely dangerous," Gabriel said in Berlin on 3 January before flying to Kyiv as quoted by DW. His visit should demonstrate to the Ukrainians that Germany will not leave them in trouble, he added.

Several months of the last year marked the greatest outbreak of hostilities since the signing of the Minsk agreements, the German minister said. "Until now, there is too much shooting in Donbas, and so far there is a large number of weapons in this region," he added.

He also called the "two symbols of hope" the swap of prisoners and an agreement on a cease-fire. "This should continue... We will continue to do everything in order to find a solution to this conflict, which will ultimately bring peace to the region," Gabriel added.

Gabriel arrives in Kyiv on January 3 for talks with his Ukrainian counterpart Pavlo Klimkin. The two ministers will discuss the implementation of the Minsk peace accords. After the talks, Gabriel and Klimkin are expected to travel to eastern Ukraine and visit the areas near the demarcation line between Ukrainian forces and pro-Russian insurgents.

The two officials are also set to discuss the "dynamic and fruitful" bilateral ties between Germany and Ukraine, as Berlin "provides significant practical assistance in implementing systemic reforms in Ukraine," the statement added. The visit's agenda also includes negotiations with Ukrainian politicians, and with the staff of the OSCE monitoring mission.

The negotiations in Kyiv will touch upon reforms in Ukraine, in particular, the fight against corruption.