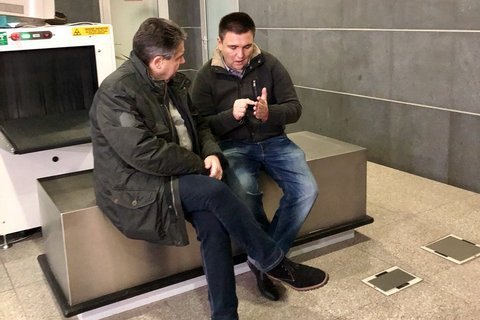 The foreign ministers of Ukraine and Germany, Pavlo Klimkin and Sigmar Gabriel, did not go to the contact line in Donbas on Thursday because of bad weather conditions.

"The weather conditions did not allow us to visit the contact line, but they did not prevent a productive dialogue with the foreign minister of Germany, Sigmar Gabriel. We are planning to visit Donbas together later this month," Klimkin said on Twitter on Thursday, 4 January.

On Thursday morning, the Ukrainian Foreign Ministry tweeted the photos of the two ministers and the ambassador of Germany to Ukraine, Ernst Reichel, on a plane captioned "Pavlo Klimkin briefs his German colleague Sigmar Gabriel before flying to Donbas". Later, the ministry reported that the two foreign ministers visited the city of Dnipro.

Gabriel and Klimkin planned to go the contact line near Mariupol (Donetsk Region) on 4 January. The top German diplomat arrived in Ukraine on 3 January.

Gabriel will complete his visit and return to Germany on 4 January.