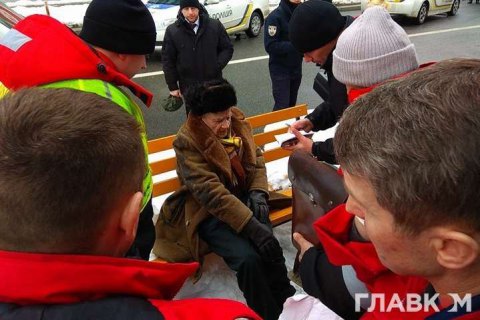 A police car from the presidential motorcade has hit an elderly man on the junction of Shovkovychna and Instytutska streets in central Kyiv, according to the Glavcom website whose office is on Shovkovychna.

The car which knocked down the man stayed while other cars in the motorcade continued movement.

The man took to his feet on his own and sat down on a bench nearby. A police patrol administered first aid and called an ambulance.

The pensioner was taken to hospital with wounds of medium gravity, according to doctors.

Witnesses said that the men breached traffic rules as he dashed across the street despite a traffic guard's banning signal. They also said the car was moving at around 80 km per hour.

Police said that the victim was born in 1930. They confirmed the man jumped onto the road despite the banning signal.

According to preliminary reports, the man had his leg broken and a concussion.

"Regardless of a traffic guard's signal, we are talking about an elderly man. The president regrets the road accident involving a police car and has already issued instructions to provide the victim with due assistance," presidential press secretary Svyatoslav Tseholko said.