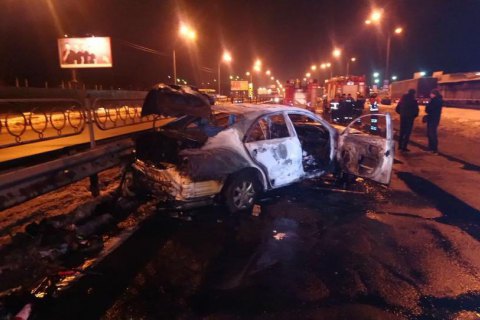 Two grenades were thrown at a car near Kyiv's Lisova metro station in the early hours of 7 March, leaving one person wounded and a Toyota Camry burnt, according to the road incident tracking website dtp.kiev.ua. Two perpetrators fled in the direction of Brovary, police launched a hunt.

The press secretary of the Security Service of Ukraine (SBU), Olena Hitlyanska, said later in the day that it was a special operation by the SBU which went wrong.

"Our employees attempted to detain an arms dealer. It turned out to be a policeman. When he understood that these were SBU employees trying to detain him, he threw a grenade and ran away," she said on the air of 112 Ukrayina TV.

Earlier, MP Semen Semenchenko's assistant Yuriy Zubar said on Facebook that the wounded person was an SBU employee. The man who hurled the grenades was allegedly a former member of the Berkut riot police and currently a police sergeant in the special-purpose regiment. Reportedly, he put up resistance, threw two grenades and left.