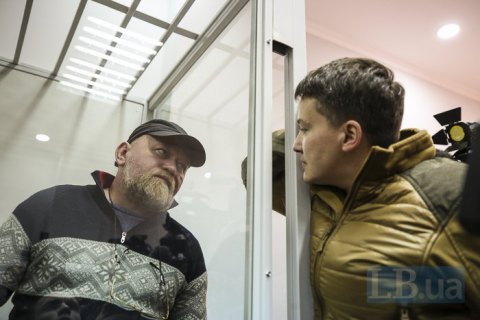 MP Nadiya Savchenko was summoned for questioning on 13 March in the case of the head of Office Corps centre for Prisoner Release, Volodymyr Ruban, Prosecutor-General Yuriy Lutsenko has said.

"The Security Service of Ukraine (SBU) summoned MP Savchenko for questioning tomorrow. At 4 in the morning today, she left the country to take part in an international conference, in which certain MPs were planned to take part," Lutsenko said.

"I would like to address MP Savchenko: if she is as brave and honest as she says, she must visit the SBU tomorrow," the prosecutor-general said.

Ruban was detained on 8 March at a checkpoint as he was leaving the self-proclaimed Donetsk People's Republic with a large stock of arms in the van he was driving. He is suspected of plotting attacks on the country's leadership. Savchenko wanted the court to release him on her surety but Ruban was arrested for two months without bail, until 6 May.

A year ago, Savchenko and Ruban went to a penal colony in occupied Makiyivka where Ukrainian POWs were held.