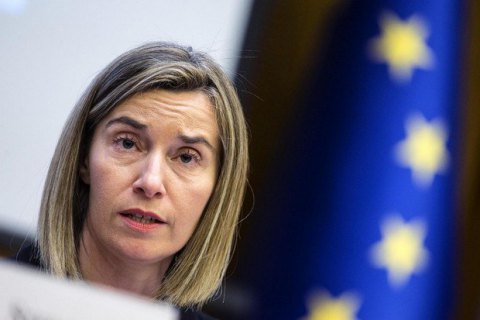 High Representative of the European Union for Foreign Affairs and Security Policy Federica Mogherini, who is coming to Ukraine on a visit, has called on the Ukrainian authorities to boost anticorruption efforts."We know that some crucial legislation for the Association Agreement still has to be adopted. Work needs to be doubled in some crucial areas," she said in an interview with the UNIAN news agency.

"Anticorruption is one of those and here we expect the law setting up an independent and efficient High Anticorruption Court to be passed, bringing the draft fully in line with the recommendations of the Venice Commission. Another important step would be to make sure that the asset declarations of officials and high-profile public figures are actually analysed. We also expect a reform of the e-declarations system, so that it allows civil society and NGOs to do their work. This is what the people of Ukraine need and expect – and we will continue to be on their side, with our support to Ukraine's reform agenda."

When asked would it be correct to say that there is Ukraine fatigue in the EU, she answered: "Not at all. Our political and diplomatic engagement is more intense than ever […] It is true that some of the reforms are not moving forward as quickly as we would like them to: yet we remain as committed as we always have been to the reform process, because our commitment is to the Ukrainian people."

Ukrainian President Petro Poroshenko recently said in an interview with The Financial Times that Ukraine had carried out as many reforms in the last six months as no other country in the world.

International financial organisations insisted that Ukraine should set up an anticorruption court. The Ukrainian authorities have long been blocking its creation. In December 2017, parliament received the presidential bill on the Anticorruption Court.

On 1 March, the bill had its first reading in parliament. The Ukrainian authorities promised that the bill would be reworked by the second reading in line with recommendations from the Venice Commission.