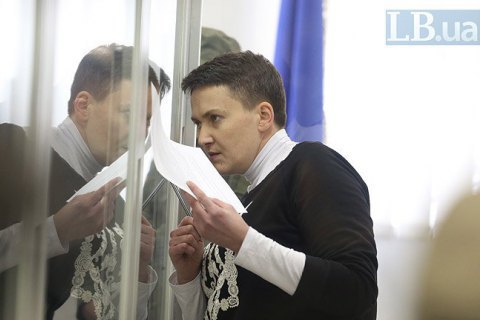 Ukrainian Prosecutor-General Yuriy Lutsenko has said he knows the names of colonels of the Russian armed forces who gave Ukrainian MP Nadiya Savchenko weapons for a terrorist attack in central Kyiv, which was prevented by the Ukrainian special services.

"The Ukrainian people are now engaged in 'three wars'. The entire world knows about the first war – it's a war with the Russian occupying army and Russian-led forces in Donbas. We're fighting not only with 40,000 armed separatists and terrorists, not only with thousands of officers of the Russian army that control them, and I say this officially," he said at National University Ostroh Academy in Rivne Region, an UNIAN correspondent has reported.

He also gave an example of a terrorist act planned by Nadiya Savchenko when "we have proved that certain colonels of the armed forces of the Russian Federation gave her weapons for the terrorist attack [due to be committed] in the centre of the Ukrainian capital".

"We know these colonels by their names, noms de guerre, their ranks," Lutsenko said.

As UNIAN reported, parliament on 22 March green-lighted the arrest of MP Nadyia Savchenko, a former Ukrainian pilot released from a Russian prison as part of a prisoner-of-war exchange. Ukraine's prosecutors charged Savchenko with plotting a coup and an act of terror in Ukraine, following an elaborate sting operation by SBU Security Service agents, who initially targeted former hostage swap negotiator Volodymyr Ruban. The latter is believed to have conspired with Savchenko.

Savchenko is suspected of committing crimes under Part 1 of Article 109 (actions aimed at the forcible change or overthrow of the constitutional order or seizure of state power); Part 1 of Article 14 (preparations for a crime), Part 2 of Article 28 (committing a crime by a group of persons, a group of persons by prior agreement, an organized group or a criminal organization), Article 112 (an attempted attack on the life of a public figure), Part 3 of Article 258 (an act of terror); Part 1 of Article 258-3 (creation of a terrorist group or organization) and Part 1 of Article 263 (illegal possession of weapons, ammunition or explosives) of the Criminal Code of Ukraine. On 23 March, Kyiv's Shevchenkivskyy district court ruled that Savchenko be recalled in custody for 59 days without bail. She announced in the courtroom she would go on hunger strike, denying plans to flee Ukraine. On 29 March, Kyiv's Court of Appeals upheld the decision of the first instance court to keep Savchenko behind bars for a period of 59 days until 20 May.