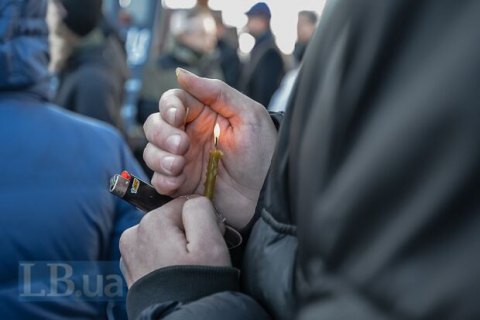 Three Ukrainian servicemen were killed and one wounded in combat on the line of contact in Donbas, according to the press centre of the Joint Forces Operation HQ.

"The Russian occupying troops violated a ceasefire 12 times, including four times with weapons banned by the Minsk agreements," the HQ said.

Near Mariupol, engagements took place near Lebedynske, Vodyane, Hnutove and Talakivka, where the enemy used grenade launchers and small arms.

"Militants of the Russian occupying troops tested our positions near Bohdanivka for strength with 122-mm artillery shells. As a result of the enemy fire, three Ukrainian servicemen sustained wounds incompatible with life," the HQ said. It added that as a result of active combat near Vodyane, one more serviceman was wounded.

In the Luhansk sector, it was not quiet near Krymske where our positions were targeted with a 82-mm mortar.

In the Donetsk sector, the enemy fired on the defenders of Maryinka with small arms.

According to the Donetsk regional police, two civilians were wounded during an enemy attack on Zalizne.

Earlier today, the trilateral contact group in Minsk agreed on the next ceasefire as of 1 July.