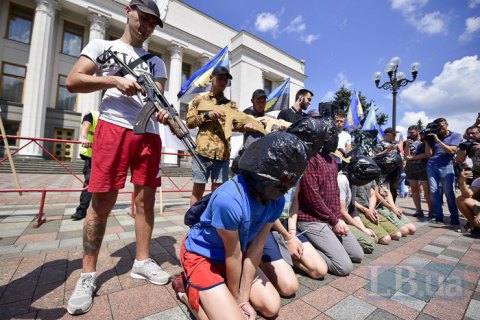 A "parade of prisoners" flashmob was held in front of the Ukrainian parliament in Kyiv, according to an LB.ua.They put cells and suggested that MPs spend some time behind the bars "to get at least a remote sense of what it is like to be a hostage".

The event was in support of Ukrainian political prisoners in Russia and Crimea and those who are held by pro-Russian militants in Donbas.

Ukrainian Prisoners Association NGO, which organized the event, demanded that all Ukrainian citizens illegally convicted in Russia be released, and international humanitarian law be respected.

As reported earlier, Ukraine's ombudsperson Lyudmyla Denisova has been denied access to Ukrainian political prisoners in Russia despite the two presidents' apparent agreement.