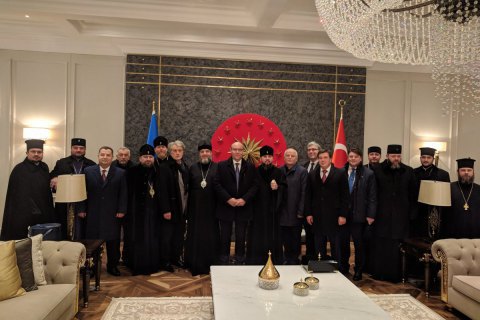 The Ukrainian delegation arrived in Istanbul to receive the Tomos from Ecumenical Patriarch Bartholomew granting autocephaly to the Ukrainian Orthodox Church.

"We are on our way to His Holiness Ecumenical Patriarch Bartholomew with words of sincere gratitude from the entire Ukrainian nation for the historic decision to grant the Tomos to the Autocephalous Local Orthodox Church of Ukraine," Ukrainian President Petro Poroshenko tweeted on the morning of 5 January,

A meeting with Ecumenical Patriarch Bartholomew is scheduled for 5 January.

The delegation will attend the signing of the Tomos and the following prayer.

Poroshenko and Epifaniy will make statements following the signing ceremony.

The ceremony of handing the Tomos over to Metropolitan Epifaniy will take place on 6 January.