The word “Maidan” is of Turkish origin and simply means square. By the way, the word “Cossack” is from Turkish as is the more recent “Bayraktar”.

But today, for Ukrainians, a Maidan is not simply just a square but a specific place in our capital, and even more – a way of fighting for our freedom.

Although it all started with a square in the center of Kyiv.

It was then called the October Revolution Square. And in October 1990, one of the first mass protests took place there. Ukrainians students occupied the center of the capital of a Soviet republic. They pitched tents and announced that they would not leave until the authorities complied with their demands. Students fought for independence from the imperial center in Moscow. Their action and mass hunger strike became an important factor that led to the collapse of Soviet power.

On August 24, 1991, Ukraine regained its independence and that protest square became Independence Square.

The student Revolution on Granite became the first Maidan, in the sense of a protest action, as it had all the attributes of the next Maidans in 2004 and 2013-14: protesters constantly controlled the central square of the capital, there were tents, flags, posters, regular concerts, meetings, discussions.

While the first Maidan was a manifestation of the struggle for independence, the second in 2004 demonstrated our desire to defend our right to choose.

It is this right that has largely distinguished Ukraine from other post-Soviet republics, where it has virtually disappeared, becoming a political setting for authoritarian regimes. In Ukraine, on the other hand, all presidential elections (except in 1999) have always been won by the opposition, which has led to a rotation of power.

Opposition members also expected this type of rotation in 2004. It was feared by the then government led by Leonid Kuchma. The latter had no chance of winning the election – opposition leader Viktor Yushchenko had a high level of popularity, while Kuchma and Kremlin protégé Viktor Yanukovych did not have it. In order to maintain control over the country, the authorities dared to rig the election. This was done openly and brazenly.

On November 21, 2004, outraged citizens marched to Independence Square in Kyiv. There was a big stage with constant rallying-concerts, hundreds of tents in which protesters lived, despite the snow and frost. Their perseverance in the fight against bad weather and the authorities, in the autumn and winter of 2004, surprised the world so much that these events became the focus of world media and the words “Ukraine”, “Maidan”, “Orange Revolution” did not disappear from the front pages of newspapers and television stories.

In the end, those interested in Ukraine got their happy ending – after several weeks of dramatic confrontation, the Maidan won. Opposition leader Viktor Yushchenko became president.

Unfortunately, the new ruling team did not take full advantage of this opportunity. Instead, pro-Russian forces managed to take its revenge. And in 2010, Kremlin protégé Viktor Yanukovych became president of Ukraine. And immediately began to implement the tasks of their masters – to erase the difference between Ukraine and Russia in culture, language, historical views of the past, geopolitical plans for the future.

In the end, it was an attempt to curtail European integration that led Ukrainians to a new mass protest, which became a new Maidan, the Euromaidan or the Revolution of Dignity. Yanukovych himself believed that there were no significant differences between Ukrainians and Russians, so he tried to crack down on his own people using repression, as Putin had done successfully before.

But the violent dispersal of students, the beating and arrest of activists, and the adoption of the “dictatorial laws” which made mass rallies impossible – added fuel to the fire of protest. Activists also responded to the government’s violent use of force. Molotov cocktails flew at the regime’s servants. In response, they began to shoot. 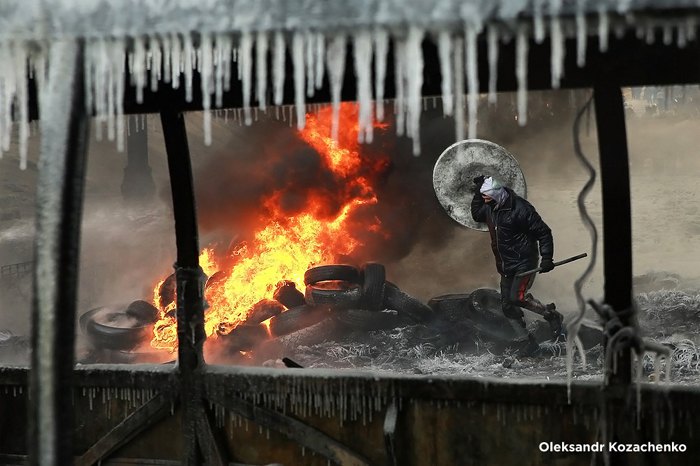 On 22 January, on the Day of Unity, Ukraine learned about the first Maidan killings. Less than a month later, the authorities decided to liquidate the Maidan completely. The area became a real battlefield. Then, between February 18-20, 2014, it seemed that Independence Square remained a small island of freedom in a country that was being turned into a copy of authoritarian Russia.

But the desperate resistance of those on the Maidan changed the situation. Despite the victims, among whom there were already about a hundred killed (they were immediately called by the poetic expression of Heavenly Hundred), protests erupted.

It raged not only in Kyiv but throughout the country and grew into a real national uprising – against attempts to turn Ukraine into Russia, to push us toward a Soviet past.

Yanukovych finally understood that Ukrainians and Russians were completely different, that Russian methods of repression did not work and so he fled back to his masters. Russia realized that it was losing Ukraine, and it will be impossible to maintain control over our state through pseudo-Ukrainian politicians who were their agents. Therefore, postponing political tools, it resorted to its military, capturing the Crimea and part of the Donbas.

But its attempts to seize the entire south and east of Ukraine during the so-called “Russian Spring” special operation failed. The Ukrainian army, which was formed in the crucible of confrontation, managed to stop Russian aggression, localize it to parts of Donetsk and Luhansk. Russia was stopped, the fighting raged, continuing to take lives, but it was only a pause that lasted until February 24, 2022 when the war continued with renewed vigor.