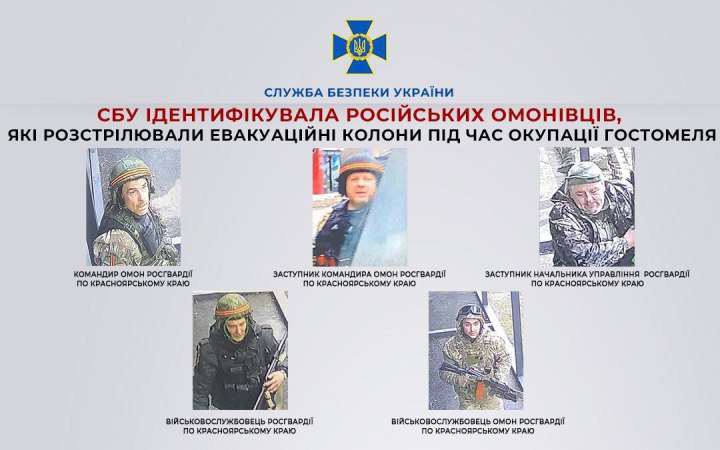 During the stabilization measures in the liberated districts of Kyiv Region, the Security Service of Ukraine identified five more invaders who committed war crimes in the region, the SSU press service reports.

"On 25 February this year, they shot 10 cars with civilians from Hostomel during the temporary occupation of the village, when the victims were trying to evacuate from the combat zone to Kyiv," the statement reads.

As a result of the enemy shelling five people were killed, and six more were seriously wounded.

According to the investigation, the units of the consolidated detachment of the Rosgvardia from the cities of Kemerovo and Novokuznetsk, as well as the mobile special purpose detachment (better known as OMON) of the Krasnoyarsk Territory are involved in the crime.

It is reported that having failed to fulfill the Kremlin's task to capture Kyiv, the occupiers retreated and took up positions in Hostomel. Being in the area of Shevchenko and Svyato-Pokrovska streets, the aggressors were shooting cars with locals trying to evacuate for more than six hours.

It was established that the criminal order to shoot at civilians was given by the commander of the riot police unit, his deputy and a representative of the command of the Rosgvardia in Krasnoyarsk Territory. As a result of the investigation, their personal data and contacts were obtained.

In addition, two subordinates who personally shot the convoys were identified.

During the investigation, 11 victims and more than 40 witnesses of the crime were identified. Also, 57 examinations were authorised and nine investigative experiments were conducted, video from cameras located near the place of the shootings and a video recording of a witness of the events were obtained.

Currently, five invaders have been served notices of suspicion under Part 2 of Art. 28, Part 2 of Art. 438 (violation of the laws and customs of war, combined with premeditated murder, committed by a group of persons) of the Criminal Code of Ukraine.